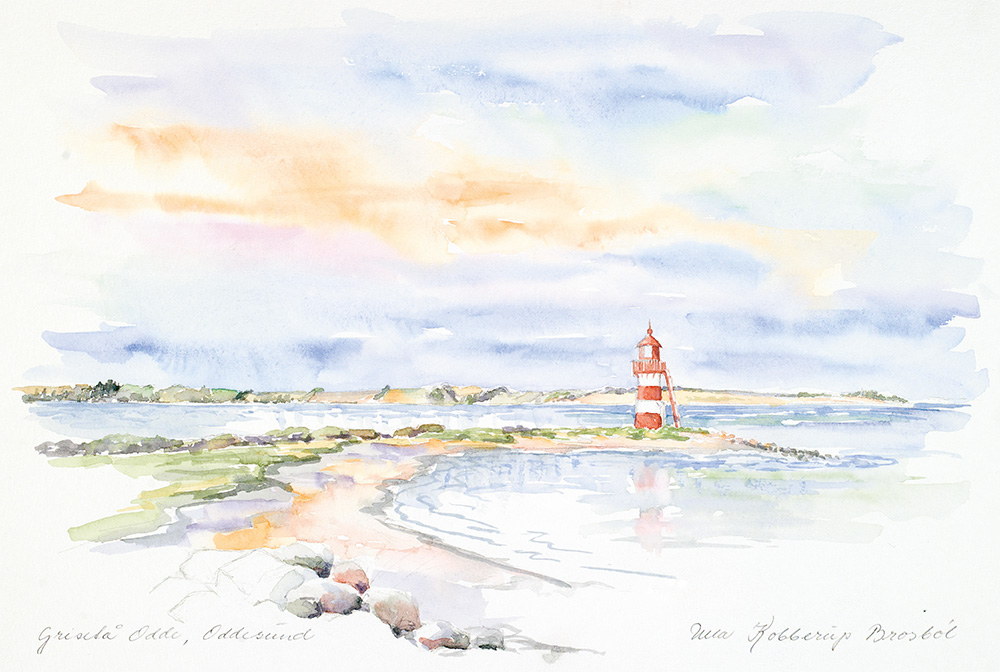 From ancient times there has been a legendary ferry place at Oddesund, connecting the area of Thy with the country south of the Limfjord. After the breakthrough of the Agger tongue in 1825, Oddesund became the main road for traffic between north and south.

Oddesund was at one time both a centre and a bottleneck among other things, because of the large amounts of cattle that were driven every year to the major markets in Germany and the Netherlands. Originally, the crossing took place with a rowing boat. The bridge across Oddesund was opened on May 15, 1938.

On the slopes in the background, at Serup Beach, there is a sacred spring devoted to Sct. Mauritius. The spring was to be discovered as a sacred spring in 1716 and was used as such in the 19th century. As a thank you for the spring for healing an old weakness, some say blindness, a Mrs Major Kraft of Rostrup estate gave Odby Church a brass chandelier, altar cloths and a chasuble. 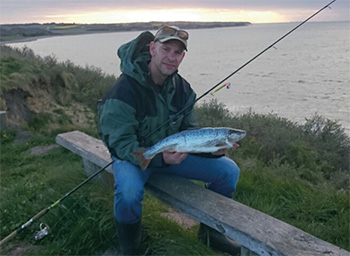 “The wind blows freshly over the waters of the Limfjord…” The Danish poet Erik Bertelsen wrote this well-known song in 1935, which contains so much hope and longing. If you imagine the sharp wind on a spring day, and your mind and your eyes directed at the surface of the Limfjord, yes, the scene is set. It is pure therapy to stand in this sometimes changing colour scheme, spotting for a sea trout (Salmo Trutta fario) to appear on the surface of the water. In the next second, the bait is placed near the activity in the water, and the sea trout may attack. These magical seconds where the fish attacks are pure adrenaline for an angler on the coast.

For anglers at the coast, it is a good idea to keep up with various weather forecasts. Wind direction is absolutely crucial. Is there a headwind, land-breeze? How good is water visibility? Water temperature is also important: Is there activity in the sea trout’s most preferred food choice? The season of the year in relation to the sea trout cycle! Many factors count, in addition to many hours of stamina and of course a big deal of luck. Using the fly rod or spinnaker rod on the salty shores of the Limfjord can become an addiction, especially if you have found a good mussel reef and tried the violent bite from a hungry sea trout.